tools and workflows based on genome variation graphs

Standard approaches to genome inference and analysis relate sequences to a single linear reference genome. This is efficient but has a fundamental problem: Differences from this reference are hard to observe and describe in a coherent way. Variation and sequence are separated. 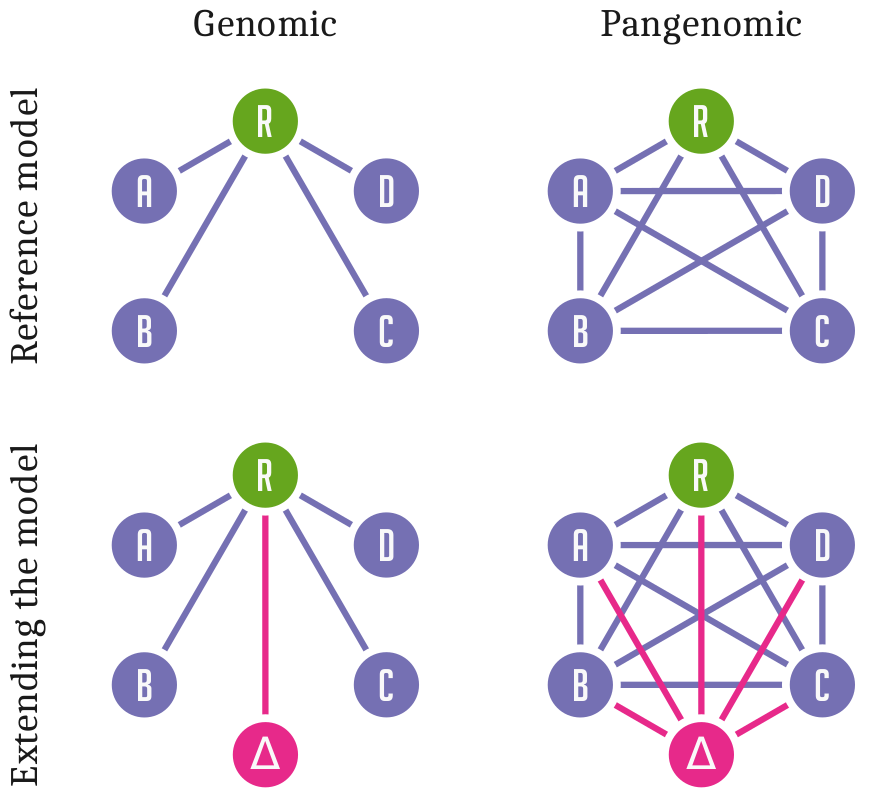 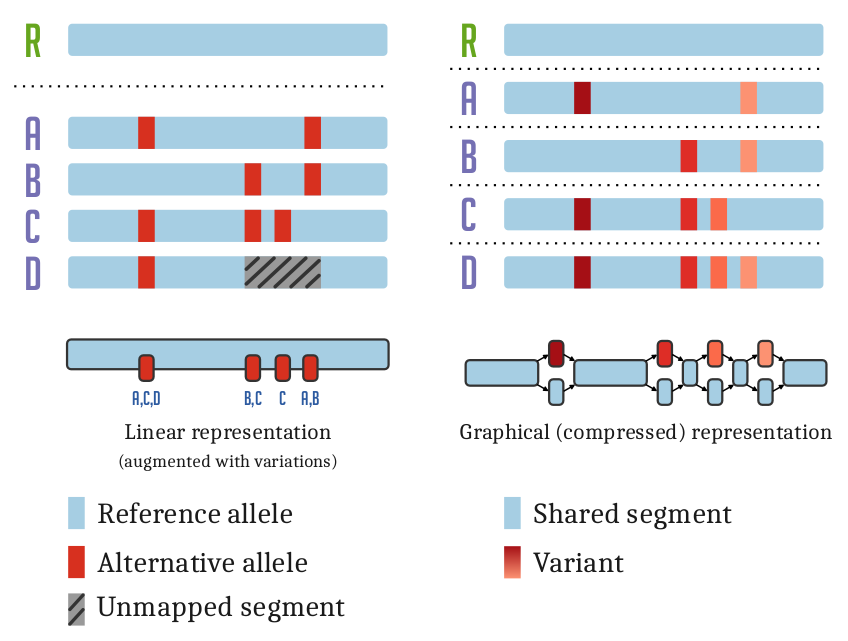 Pangenomic methods allow us to relate all genomes or sequences in our analysis directly to each other. Sequence and variation are combined into a coherent data structure. This practice is still new, and research into ways to design, implement, and apply this model is ongoing. However, there is a growing consensus around best practices. Many methods work on an augmented sequence graph model and use a handful of common data formats for input and output.

The variation graph data model describes the all-to-all alignment of many sequences (genomes or genes for instance) as walks through a graph whose nodes are labeled with DNA sequences:

Here, we document tools and workflows that operate on this graphical pangenomic data model. Our goal is to provide greater clarity for students and scientists working with this new paradigm for genomic research.

The variation graph toolkit vg provides computational methods for creating and manipulating of genome variation graphs. It's pangenome representation of a set of genomes overcomes reference bias and improves read mapping. This is highlighted in the Nature Biotechnology publication. Users can receive support on vg's Biostars page.

This pangenome graph construction pipeline renders a collection of sequences into a pangenome graph (in the variation graph model). Its goal is to build a graph that is locally directed and acyclic while preserving large-scale variation. Maintaining local linearity is important for the interpretation, visualization, and reuse of pangenome variation graphs. A Nextflow version of the pipeline is also available nf-core/pangenome.

The succinct graph index xg presents a static index of nodes, edges and paths of a variation graph. xg can be used to annotate graph nodes with their reference path relative positions. It was a key component of early development in vg, and was use to scale short read mapping to large genomes. It implements the libhandlegraph API.

odgi, the Optimized Dynamic (genome) Graph Interface, links a thrifty dynamic in-memory variation graph data model to a set of algorithms designed for scalable sorting, pruning, transformation, and visualization of very large genome graphs. odgi includes python bindings that can be used to directly interface with its data model. The odgi manual provides detailed information about its features and subcommands, including examples.

GWBT - Graph BWT is a substring index for paths in a variation graph. It is based on the positional Burrows-Wheeler transform (PBWT) and independently implements its graph extension (gPBWT). The GBWT supports extreme compression of genome sequences, requiring only 1 bit per 1 kilobasepair of sequence to store a 1000 Genomes Project. For documentation see the GBWT wiki.

SpOdgi transforms any odgi genome variation graph file into a SPARQL capable database. The RDF semantics are described in the vg ontology directory. This transformation allows us to connect variation graphs to other RDF resources, supporting their query using logic programming. Many operations or queries that are implemented in custom code in other pangenome tools can be expressed in compact SPARQL queries executed against SpOdgi.

Lessons learned when designing algorithms for variation graphs guided the development of the HandleGraph model and API. It formalizes ways of addressing, traversing, and manipulating the fundamental units of variation graphs. Implemented in libhandlegraph, this C++ API hierarchy defines a set of capabilities from the simplest: a static bidirected DNA sequence graph, to the most complex: dynamic graphs with modifiable paths, and covers a number of important capabilities including serialization and positional indexing.

libbdsg brings together a collection of dynamic HandleGraph implementations. PackedGraph is designed to have a very low memory footprint. HashGraph is implemented using a collection high-performance hash tables with the goal of providing the highest-possible runtime performance at the cost of increased memory usage. For more details see the handle graph API comparison paper. The bdsg Read the Docs! provides detailed information about starting a project with libbdsg, its python interface, tutorials, and an overview of available methods.

The alignment to variation graph inducer seqwish renders a set of sequences and alignments into the equivalent variation graph. It accomplishes this using a number of tricks to reduce its memory footprint while maintaining a high degree of parallelism. The result is entirely dependent on the input alignments, which it represents losslessly. seqwish is generic: it can induce variation graphs from a collection of human genomes, or a set of noisy nanopore reads.

smoothxg finds blocks of paths that are collinear within a variation graph. It applies partial order alignment to each block, yielding an acyclic variation graph. Then, to yield a "smoothed" graph, it walks the original paths to lace these subgraphs together. The resulting graph only contains cyclic or inverting structures larger than the chosen block size, and is otherwise manifold linear.

maffer projects between pangenomic variation graphs (stored in GFAv1 or xg format), which can be used to encode whole genome alignments, and the multiple alignment format MAF, which represents only the linearizable components of such an alignment graph.

The sequence to graph aligner GraphAligner implements a novel, high performance alignment algorithm capable of aligning to graphs of arbitrary topological complexity with minimal overhead relative to a linear aligner. Its seeding strategy, which is based on exact matches (minimizers) in whole nodes, limits it to longer reads. It produces GAM and GAF alignment formats compatible with other pangenome graph based tools.

Sequence Tube Map is a javascript module visualizing variation graphs in a tube-map-like layout. It renders variation graphs using a "tube map" model in which paths representing genomes flow through the sequence nodes of the graph. Currently, it can only handle graphs created with vg.

The Pantograph project aims to build an interactive pangenome visualization tool for COVID-19 data that includes annotation and metadata. On the long run, it should be capable to visualize a pangenome of 1,000s of individuals and gigabase genomes, scaling from nucleotide to whole chromosome level.

Originally developed for assembly graph visualization, Bandage is an indispensable tool for visual inspection of variation graphs as well as assembly graphs.